since last posting I unexpectedly moved.  An apartment in my same building, nicer apartment, became available and I decided to take it - but then had to move in less than two weeks amid ton of deadlines at work (that pesky 9 to 5 thing that pays the bills and allows me to buy fabric).  I'd been in that last apartment for 5 years, so there was a fair amount of STUFF to go through.  so no sewing and no blogging - I mean how could I possibly when this is what the sewing room looked like??? 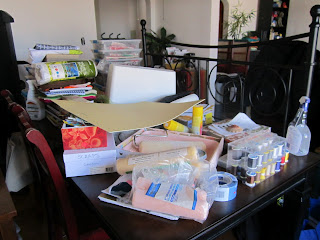 UGH!
moved into the new place without much help - seemed like it would be simple since it's in the same building, and I didn't really want to bother anyone, but I think I'll be using professional movers from here on out.  still, fun to rearrange everything, clean out closets and files, and have an excuse to go shopping...  found a spot for the fish quilt 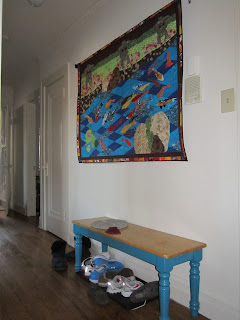 and bought myself a chair and pillows from the sale section of Pier One (love Pier One!). 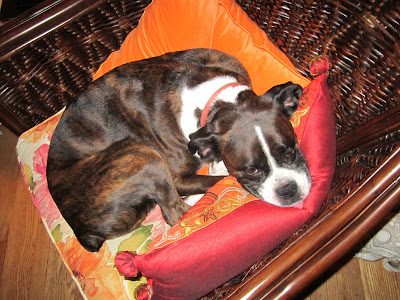 or, at least what was SUPPOSED to be my chair.

took a little bit, but the sewing room (still what some might call the dining room) is finally settled enough to get back into my sewing groove.  And it's Spring, so some babies are due - which is always one of the best excuses for making a quilt! 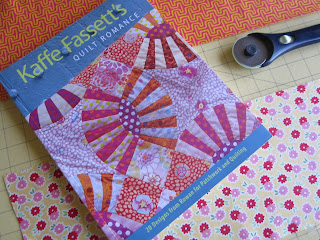 I was asked about the Pickle Dish Quilt, if there is a pattern.  It is from a Kaffe book - Quilt Romance, shown on the cover in a different color scheme.  It gets 3 stars in the book for difficulty, and I'll admit I had to throw away the first two blocks I attempted, but once you get the hang of the curve piecing, it's really not that difficult.  Of course, it is still in the UFO column - and in danger of being in the FUFO column.  (I don't like to use certain words, so I won't clarify. )  It'll get done.  Someday.

At any rate, fabric is spread out, the sewing machine is uncovered and hot to trot, ironing board and iron are out...  and a new quilt is begun.  It gets to go in the WIP column, which is really so much more fun than that UFO place.

pretty little dresdens all in a row...  (pesky pickle dish in the background - patiently waiting it's turn)

SO glad to get something going again!  You know it's time when the teen starts asking "when are you going to sew again?"  maybe, just maybe, I get a little cranky when too much time passes between quilting projects.  Well, bean, Momo's back at the machine. 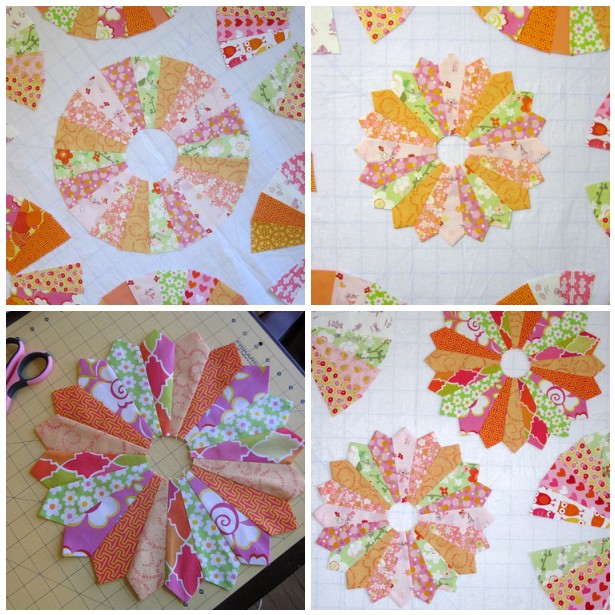