well, vacation is over and I’m back at the machine.  have to go to work tomorrow, which I avoided thinking about most of the day by playing with fabric.  I joined two bees for the month of September.  having never been in a bee before, I’m not quite sure why I joined TWO.  and then went out of town on vacation!  silly.  so this week will be spent on bee stuff whenever sewing time is available.  the block above is my practice block – decidedly shy of the 12 1/2” (unfinished) that it should be.  which made me glad that i did a practice block.  my needle was slightly left of where it should be for my 1/4” foot to work properly.  I only got one block made of the 5 i need to finish this month. 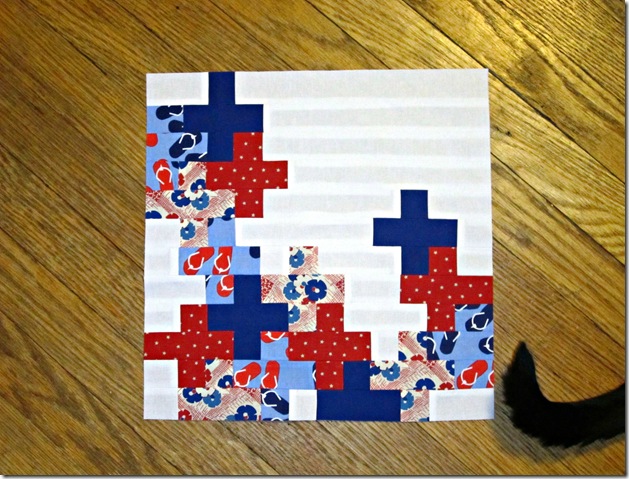 I think it’s kind of cute, though.  NuBees Jan asked for red, white and blue on a white background.  It looks very fourth of July to me.  I hope she likes it.  It’s more stressful than I thought it’d be to make blocks for people you’ve only just met – and online at that.  The block is called ON THE PLUS SIDE by Emily Cier from the MODERN BLOCKS book that came out last year.  There are 99 block designs in the book and this is the first I’ve tried.  It was pretty straight-forward, but a lot of pieces.  I think if you had a bunch of these blocks, and non-directional fabrics, it’d be fun to twist and turn the blocks and see what other designs would show up.

yes, that is a cat tail in that photo.  trying to take photos so close to everyone’s dinnertime is a mistake.  this one came over to “help”, too. 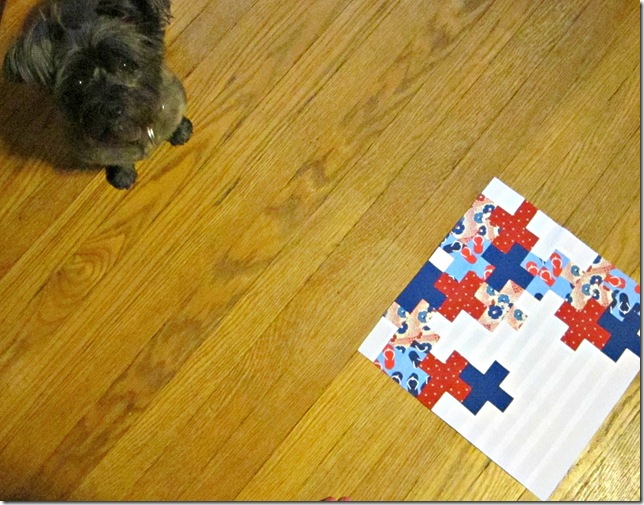 there’s also a teen in the background asking when i’m going to start cooking.  we’re having soup for dinner – seems like she could get that started while i finish this up.  ha ha ha!!!!