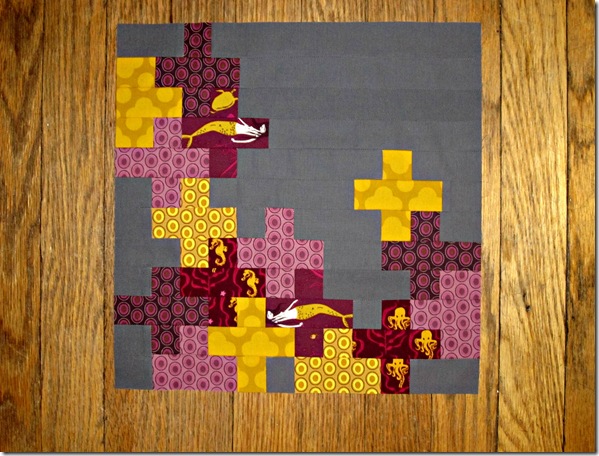 this one’s for Marla from sewhungry who requested eggplant and mustard yellow.  I thought the mustard would be a problem for me, but turns out I don’t have a lot of eggplant.  I’ve got a lot of Pat Bravo’s Oval Elements, and eggplant is my favorite color (or one of, at least) but I had to break into my super sacred precious Heather Ross Mendocino stash to finish this block.  now I want one for myself.  I wouldn’t’ve pegged myself as a mustard/eggplant gal, but I think – especially with the gray – this is a great combo.

The block I chose is from Modern Blocks, a block titled On The Plus Side and designed by Emily Cier.  As I said before, lots of pieces.  maybe other sewers don’t play around with layout as much as I do and could get a block done more quickly (but I like the fabric auditions and layout tryouts!).  This is one of those blocks that about halfway through you start to think “why did I pick this block?” but then as you get close to the end, you get excited to see the finished block.  and (again) I really think this block has awesome potential for an entire quilt.

is it annoying that it’s a late night photo?  well… I just couldn’t wait to share it.  :-)