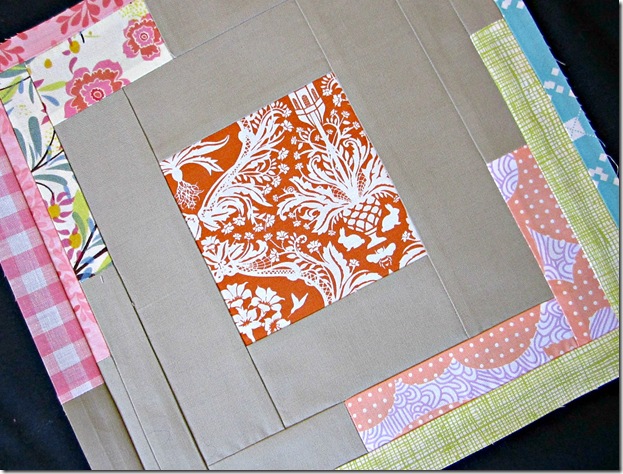 I’m not much of a fan of log cabin quilts – or at least not of making them, but I like this way of log cabining.  I made this (late) Bee block for Muriel in the Sew Buzzy Bee.  It was supposed to be done last month.  bad Donna.  I over-committed myself – both with bees and with the holiday season.  I’m opting out of the NuBees for January.  I think one Bee is enough for me to start with and I like this one best.  turns out I like to have more control over the design and fabric used in quilt blocks than the NuBees group allowed for.  control freak.  and possible perfectionist.  which explains, at least in part, why I’ve been late with bee blocks.  I’m still working on the embroidery for the bee block due the month before this one!

I’ve still got a lot of quilty catch-up to do…  I think 2013 needs to be a year focused on finishing up UFOs, although, I’ve already started a new quilt.  typical me.  I’ll show it off soon.  you might need sunglasses when I do.  snow hits and I go craving me some COLOR.  :-) 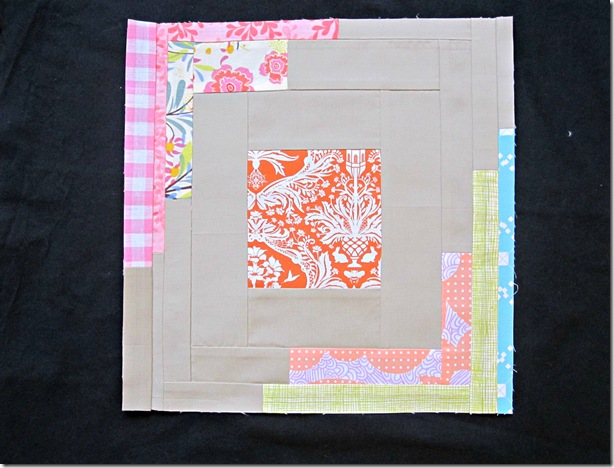 Muriel sent scraps for the logs and that wonderful Kona Stone.  It’s such a great neutral.  I have that fabric in the center in a greenish-blue color, but I can’t think what the name of it is at the moment.  I’ve seen a few of the other blocks on the Sew Buzzy flickr page, but I hope I get to see the finished quilt, too.  I think it’s a log cabin that I will like!

hope you have fun (and safe) plans for this next New Year’s weekend.