near impossible to get a good picture of this block in one piece. parts of it fuzz, the color gets weird.  It’s approximately 36” x 12 1/2”.  This was the block for October in Sew Buzzy.  yes, October.  that is why it was goal number one for me in the Finish Along hosted this year by Leanne.
This block is for Lee, who will probably never like me given that she’ll always know me as that gal that took 3 months too long to make a quilt block.  hopefully she’ll like the block well enough that it won’t matter how long it took to get to her.  She is making a quilt for her Aunt who was a school librarian.  I can’t wait to see the finished quilt.  The blocks are fabulous! 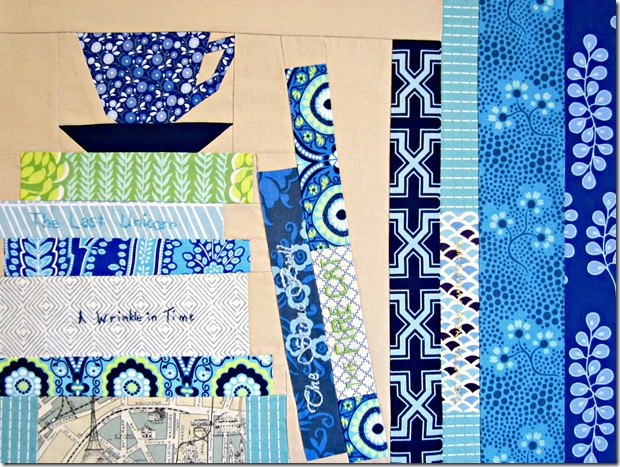 I’m not great at embroidery.  I can do it, and I think I’ve done an alright job with the book titles, but it takes me forever, it’s hard on my hands and eyes and I’m never quite sure if I’m doing it right.  I had to stop all sewing to get this off my todo list and I get kind of cranky without some sewing.  Sewing is like meditation for me, I guess.  So I don’t think there will be a lot of embroidery in my near future.  I love the look of it, but I need to reserve it for a point in my life when I have more time for handwork.
That said – I really did enjoy this block.  The fabrics Lee sent were wonderful and I was able to pull a little blue out of my stash to add in.  I’m overwhelmed with greens and blues these days.  and pink, which is why my scrappy tripalong is being done in those colors. 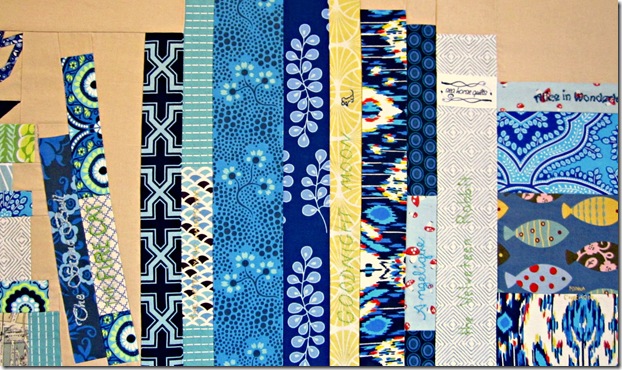 I thoroughly enjoyed trying to remember what books I liked when I was in grade school and high school.  There’s a ton of book lists on scraps of paper and bill envelopes all over my apartment right now.  In the end, I could only pick a few so I went with some that I liked when I was school age and then threw in a few for the really young that I think are must-haves. 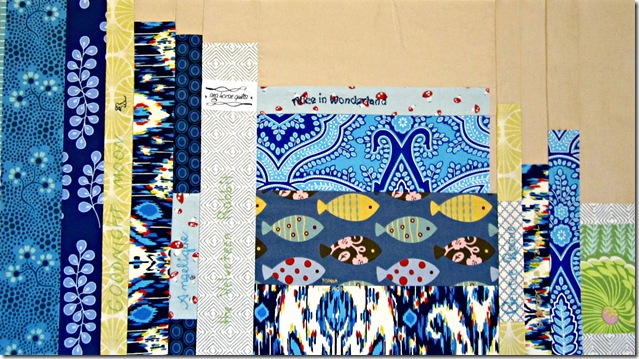 (titles I chose) The Last Unicorn by Peter S. Beagle.  A Wrinkle in Time by Madeleine L’Engle.  The Stone Bull by Phyllis A. Whitney.  The Fire Cat by Esther Holden Averill.  The Hotel New Hampshire by John Irving.  Goodnight Moon by Margaret Wise Brown.  Angelique by Seargeanne Golon.  The Velveteen Rabbit by Margery Williams.  Alice in Wonderland by Lewis Carroll.  Gentle Rogue by Johanna Lindsey.  Stranger in a Strange Land by Robert Heinlein.
I was also able to finish the January block for Sew Buzzy, so now I’m in good shape to accomplish my first goal in the FAL – to catch up and stay caught up with my bee blocks.  (I’m still waiting for my November block to be received by Muriel.  It had to go to the Netherlands, so I guess it could take awhile.  I hope it gets there soon – there’s always that “what if” that goes through your mind when you put something you’ve made in the post.) ETA - the Netherlands block made it! :-) 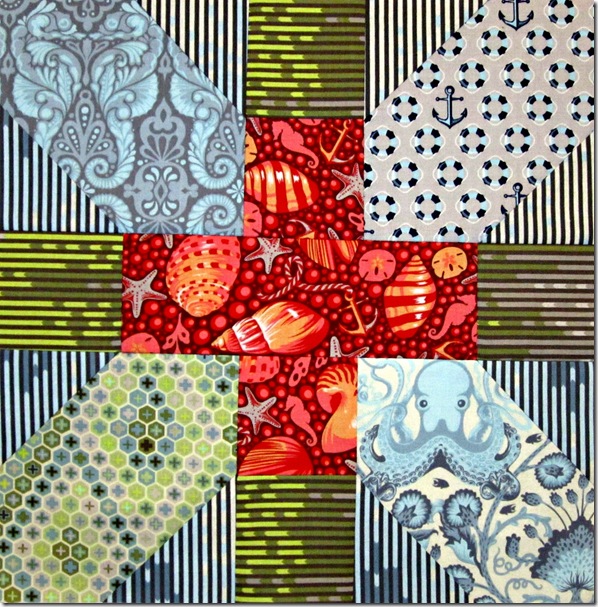 January’s block is for Ursi, who wants a Japanese x and + quilt and is using the Saltwater line from Tula Pink.  She wants her blocks to finish at 12 1/2” and linked us to this tutorial.  I want one of these quilts, too and had joined this flick’r QAL group, which uses Badskirt Amy’s tutorial for a smaller block (I think 7 1/2” finished).  before making Ursi’s block, I did a little practice run with my own fabrics and I like the size of it, so I’m going to stick with that for the rest of my own x and + quilt. 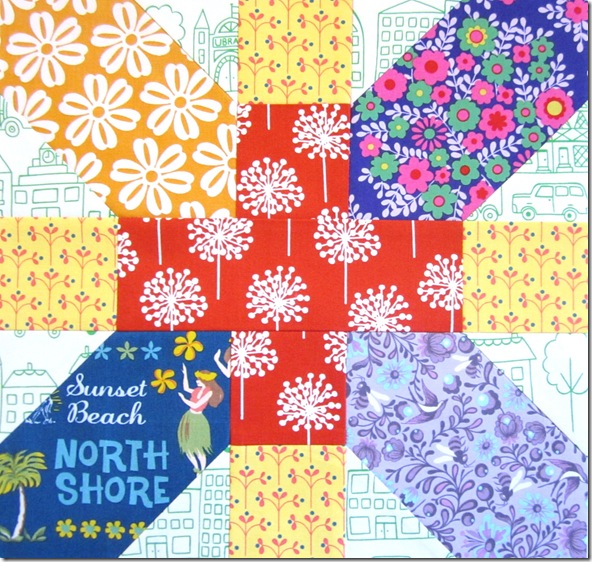 hope you’re finding time for your own fabric meditation and goal reaching!  happy FAL.  :-)
Posted by Donna at 9:26 PM