from the design wall 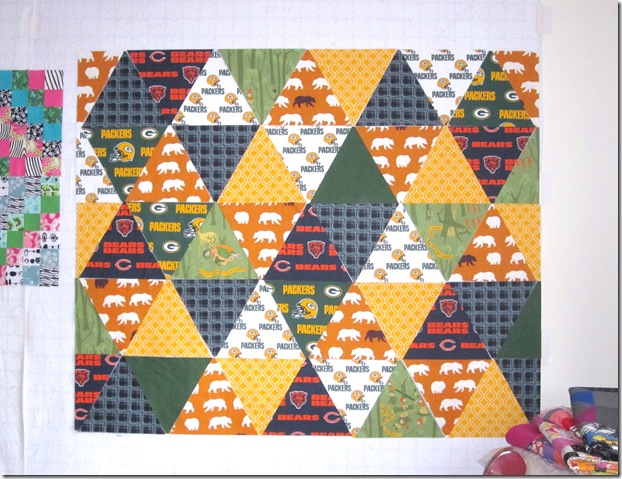 not a whole lot of sewing done since last I posted.  I was having trouble with my internet – very slow – and called Comcast.  a week of frustration, no internet, several trips to Comcast service center, multiple waste-of-my-time phone calls followed.  but (knock on wood) I now have internet, and cable – though I have no TV, because it’s somehow cheaper than just internet service alone – and I was finally able to reacquaint myself with my sewing room.

this quilt isn’t helping with frustration levels, though.  no matter how many triangles I cut, or how I arrange them on the wall, I’m not quite happy with this quilt.  my daughter finally told me to stop rearranging today.  I think she was worried that she’d have to find me a straight-jacket.  this isn’t the final layout, but it’s close.  kid knows me, and I had to listen to her wisdom (mouth of babes?).  she knows that I’d never put these colors together on my own, or choose football fabrics.  now that I’ve played with the “designer fabrics”, I’m a spoiled little fabric brat.  :-)  I have an idea for the other side (based on this) that I like better, which will probably make this the back side.  I’m thinking of calling it football and fairy tales? 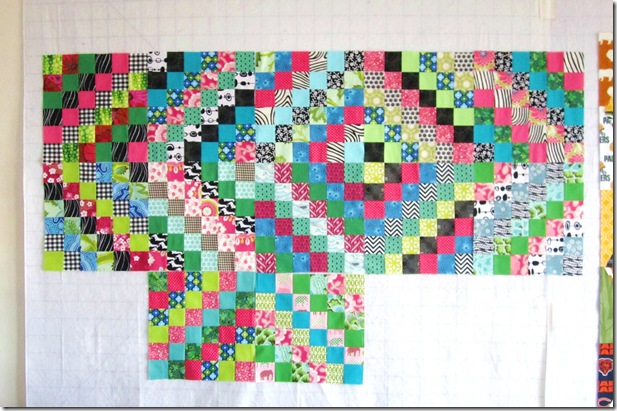 got a few more scrap trips done and I’m playing around with layouts on the other side of the design wall.  I’m kind of just slapping them up there as I finish them.  the joys of being single – how many husbands would like nearly every wall in the dining room covered in felt just so their wife could “paint” with fabric every day???

gotta walk those dogs and get ready for bed.  wish I would’ve had more time to sew, but it was a really nice weekend.  it’s back to the 9 to 5 beige office tomorrow.  after a night of quilty dreams…